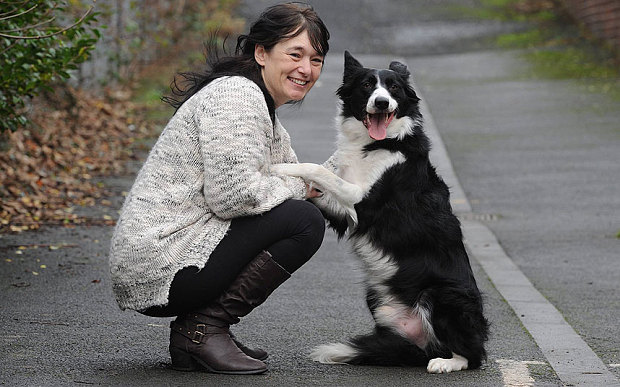 Stockton: A rescue dog is said to have saved the life of its female owner after smelling the presence of an aggressive tumor in her breast.
Josie Conlon, 46, of Stockton-on-Tees was unaware that she had breast cancer until her two-year-old collie Ted pointed out the same.
She discovered that she had breast cancer after two-year-old collie Ted began to cry, paw and nuzzle her chest.
Thus she went for a check-up and traced out the grade three tumor which was treated in time and removed.
Now Mrs Conlon has been given the all-clear assurance by her doctor.
As per the check up results she was made aware by the hospital that the cancer had not spread out.
She now believes that her life has been saved by her beloved dog ‘Ted’.
She was told by the hospital that the tumor was particularly aggressive and the same had been growing very quickly.
If she had ignored Ted’s expressions, the ailment would have been made her condition worsened.
Since a rescue dog, Ted was rarely affectionate with Mrs Conlon.
It is thought that the dog had suffered a blow to the head with his former owner and had been kept in a small cage.
Mrs Conlon, who is living with her delivery driver husband Brian, 47, got the lump removed in the middle of December.
She was given the news that the cancer had not found spread even after the surgery.
Now she has been undergoing 18 weeks of chemotherapy and four weeks of radiotherapy to ensure that the cancer does not return even though her clinical report is good.
The mother-of-three is now keen to let others know that they should take notice of their dogs, if they are trying to draw attention to a certain area.

Video on a dog which can smell the presence of cancer