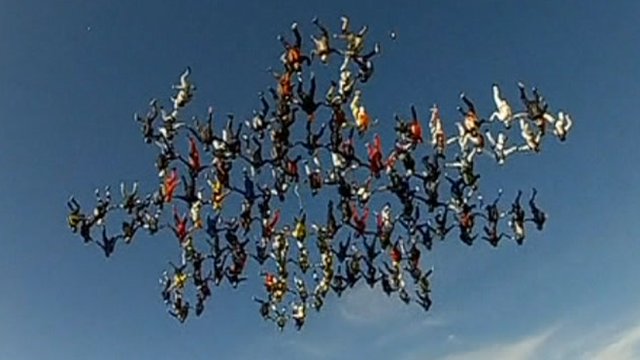 Phoenix(US): 52 skydivers from United States are said to have created a new world record for a ‘Head Up’ flight formation.
In this adventurous event, 60 skydivers were jumped out of three different airplanes before forming the impressive display.
Skydivers hailing from all around the world including United Kingdom, United States, Russia, Australia, Canada, Mexico and Germany were taken part in this spectacular display.
Head Up body flight is said to be the most difficult position where balancing is to be performed properly while building formations.
In the world record created head up flying, they had to balance themselves by mass over lift.
It is said that they achieved the feat by struggling against aerodynamics for the entire time.
The entire ‘Head Up’ flight formation event was purely amazing.
It was really a thrilling experience to watch the group of colorful skydivers in action.
During this particular venture, they could brake the record twice in two days by performing eye-catching positions first with 44 people and then with 52 people.
Images and footage of the adventurous events were taken using a helmet-mounted camera.