Spectacular moment observed when a plane flew over a rainbow 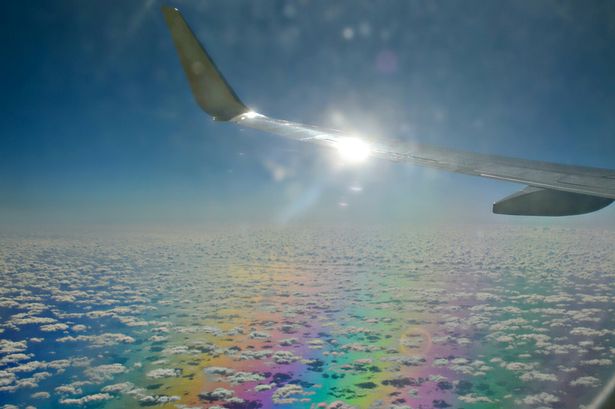 Caribbean: There was a spectacular moment when an airline passenger flew directly over a rainbow.
When plane flew over the rainbow, one astonished traveler called Melissa Rensen, unknowingly snapped the kaleidoscope of color through the plane window while it was flying over the Pacific ocean near the Caribbean Islands.
The 51-year-old didn’t realize that there had been a rainbow in the midst of the clouds and only came to know about her good fortune when she looked at the images later on.
Ms Rensen, from London in Ontario, Canada, was traveling from North America to Honduras.
She was deciding to take the pictures when she happened to see an interesting cloud formation below.
The Rainbow was absolutely beneath the cloud. Generally, Rainbows are observed when there is humidity in the atmosphere.

Video on the Rainbow photo taken by a passenger