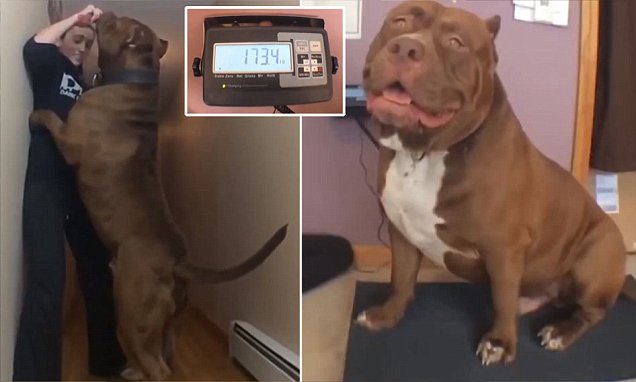 United States: The biggest dog is as big as an adult male and could pass for a small bear.
This amazingly large pit bull nicknamed Hulk, prefers to stand on its hind legs to tower over its female owner and grab a treat.
Hulk, who towers above his handlers while standing on his hind legs, has now become an Internet star.
By measuring on the scales, the big beast’s unbelievable size can be understood as about 173.4lbs, or almost 12 and a half stone.
The American Pit Bull Terriers were created by crossbreeding bulldogs, mastiffs and terriers.
They are descendants of English dogs used to bait bulls and bears during cruel pit fights.
Nowadays, these specially bread dogs have been used as fighting dogs especially during hunting in the US and In the UK
The enormous hunting dog is owned by Dark Dynasty K9s, from New Hampshire.
They are specialists in breeding and handling some of the world’s most dreadful guard dogs. They insist their animals to be calm, well balanced temperaments and would be suitable as family pets.
Many viewers said that they were amazed by the size of the giant pit bull which looked like a small bear
Others have the opinion that one could ride the beast into a battle.