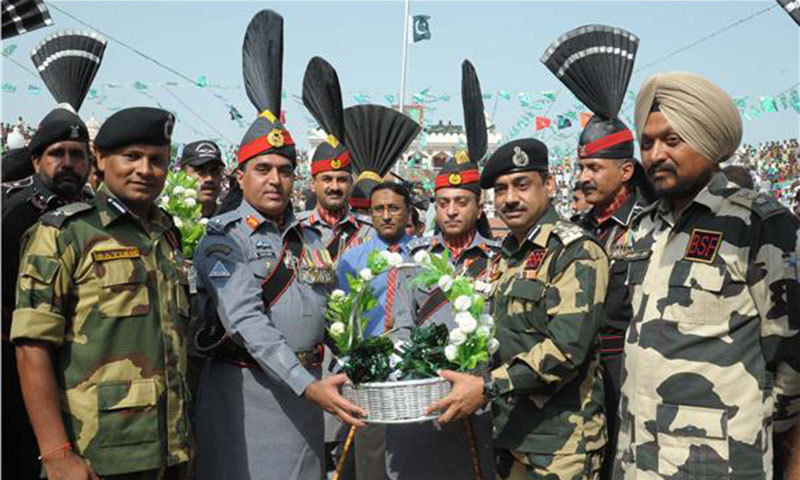 Srinagar: Traditionally sweets were exchanged between soldiers of India and Pakistan at the Wagah-Attari border in Punjab during auspicious occasions in both the countries.
This years old tradition may extended occasionally to the transit points in Jammu along the International Border and Chakan-Da-Bagh in Poonch along the Line of Control.
This was carried out as a confidence building measure while for officials a valuable time to meet each other to keep tensions under contol.
This year, there were exchange of fire between BSF and Pakistan Rangers using small arms and mortar along the International Border in Jammu and Akhnoor belt causing causalities on both sides.
According to the home ministry, there had been over 200 ceasefire violations by Pakistan in 2015 just along the International Border.
Haribhai Chaudhary, MoS (Home) told Lok Sabha in a written reply that in 2014 Pakistan had violated the ceasefire 430 times, killing 12 civilians and two BSF jawans.
In 2013 there were 148 violations reported as against 21 in 2012.
During Ramzn India had accepted a ceasefire request from Pakistan in 2003 enabling its military leadership to concentrate on the ‘war on terror’ operation that was going on at the Khyber-Pakhtunkhwa areas in Pakistan’s north-west.
However, Pakistan has violated the existing ceasefire agreement and once again started shelling along the LoC and IB to help terrorists infiltrate across the fence.
In a symbolic message to Pakistan in the backwash of heightened tensions and increased exchange of fire along the International Border and Line of Control, south of Pir Panjal, the Border Security Force (BSF) has decided neither to send nor accept sweets from Pakistan Rangers on the occasion of this year’s Independence day of India.