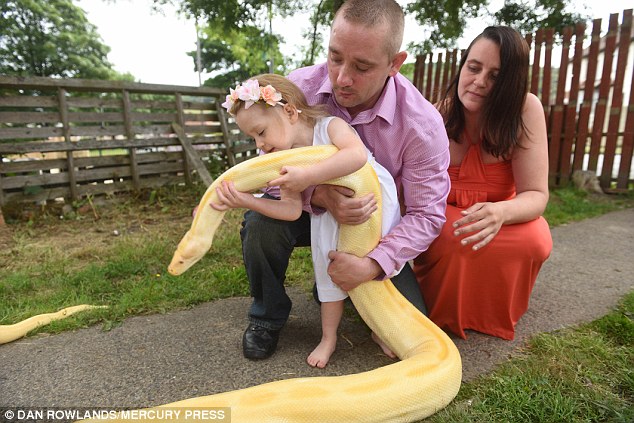 Bradford: Parents of a two year old girl from Bradford, West Yorkshire are very happy to allow their cute daughter to kiss a 15ft long Burmese Python.
The yellow colored python is said to be one of the world’s deadliest predators, capable to swallow a two year old small child with out much effort.
But this little girl is not at all afraid of the colossal Burmese python even if it likes to wrap around her body in coils.
Two-year-old Alisha-Mae can be seen embracing the snake while her parents are more than happy to see her playing with the snake.
Burmese pythons used to compress their victims to death before eating them as a whole.
In the pictures from dense forests, these pythons can be seen swallowing pigs, deer and even alligators.
But for the parents, Rob Cowan and his fiancée Stacey, such a dangerous creature is just part of their family.
In fact, the couple has 19 snakes, of which this enormous python, called Austin, is the biggest.
Mr Rob Cowan, 35, said that the eight-year-old reptile which weighs more than 13 stone was a ‘gentle giant.
According to him this snake always liked to lounge around in the back garden.
He added that the python was unbelievably friendly and obedient to them.
They all consider the python as one among their family.
Every night when Alisha-Mae and her ten-month-old brother Cameron have to go to bed, they first go to the snake room to say good night to all the snakes especially Austin who is their favorite.
While most of the family’s snakes eat mice or rats, Austin and a 14ft female anaconda need a little more to quench their hunger and hence they generally have rabbits and guinea pigs as their food.
Mr Cowan claimed that snakes were good pets and it would be careless owners who gave them a bad reputation.

Video on the two year old girl with python