Prostitutes in Amsterdam protest against closure of brothels 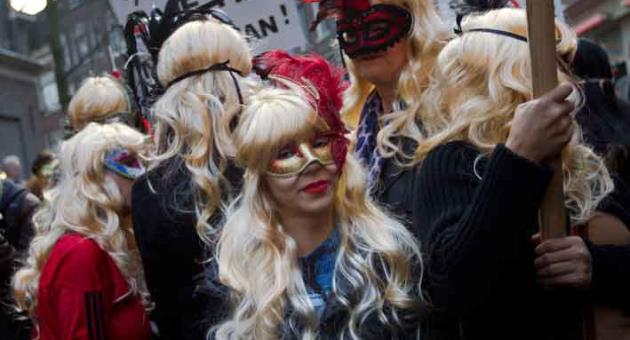 Amsterdam: The prostitutes in Amsterdam are reported to have held a protest against the decision to close down the brothels in the country.
The masked prostitutes holding banners were moved through the streets in procession to protest against the decision.
The authorities are now planning to clean up the famed red light area in the city by shuttering windows of the brothels in Amsterdam.
According to prostitutes the closure of brothels would prevent them from earning their living means.
So they have demanded to arrange some other safer places near to the city for carrying out their works independently.
About 115 such brothel windows have already been closed by the authorities.
The closure of next spate of brothels are under consideration.
Several hundreds of prostitutes and their supporters were reported to have marched through the Red light district carrying red umbrellas and banners displaying “Don’t save us, save our windows!.”
Many of the sex workers were also worn masks to hide their identity.
During the protest, hundreds of prostitutes and their supporters were gathered in the streets of Amsterdam.
The decision to close the brothel windows are on the basis of the city innovation process to be carried out.
The famous Dutch city which is featured with open mindedness has plans to rejuvenate the historic back streets and canals in the red light district by reducing the number of windows used for prostitution.
In addition, the city authorities have also proposed to close down some of the brothels in the red light district, as an effort to combat human trafficking.
However, sex workers have claimed the shuttering as a negligence to work from a safer place.
More than 100 of the 500 red-and-pink-lit windows of the brothels in Amsterdam have been closed during recent years.
Now, they have planned to close down dozens of such brothels.
Moreover, the council has already reduced the funding intended for that part of the project.
Prostitution has been legally allowed in the Netherlands for the last 15 years.
Thus in Amsterdam only, there are about 7,000 sex workers.
Three quarters of them are form less developed countries located in Eastern Europe.

Video on the protest of Amsterdam prostitutes