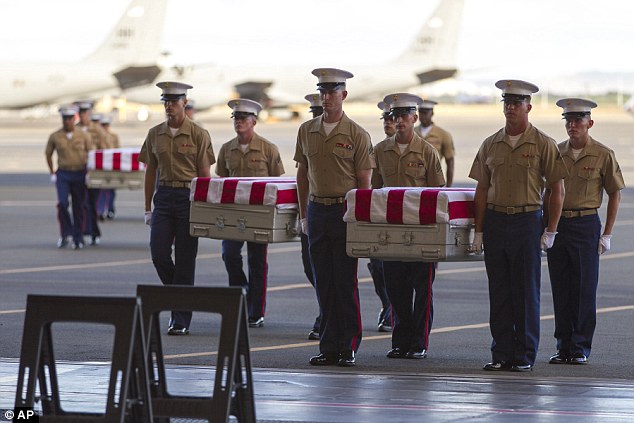 Pearl Harbor: The remains of 36 US Marines assumed to have killed during second world war are being brought home after 72 years.
The unidentified body remains are said to have recovered from a remote Japanese Island called atoll of Tarawa in the Pacific Ocean.
It is said that the bloodiest battle of second world war was occurred at this chain of Islands.
More than 6000 soldiers were lost their lives within the first three days of that merciless encounter.
The remains recovered after four months excavation process by a group called US Charity History Flight, were then flown to Pearl Harbor where a ceremony was held to mark respect to the bravely fought soldiers.
The recovery was the outcome of a multi-million-dollar research project which took a long duration of nine years.
History Flight is a non-profit organization ‘committed to maintain World War II aviation history alive.
The organization is now working with the military to identify the remains that brought home.
They will be given to the families of the respective soldiers if the process of identification is completed.
It is said that the marines were invaded the Japanese-held Tarawa Atoll in November 1943 where more than 1,000 Americans were died.
In the three day gunfire, the entire Japanese military post comprising of 4,500 soldiers was destroyed completely.
The Japanese retaliation with machine-gun is said to have killed scores of Americans as their boats got stuck on the reef during low tide.
It is said that the intention of US military was to conduct an amphibious operation on the Island.