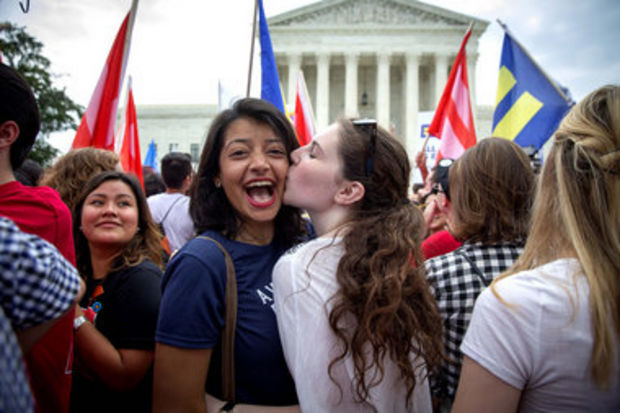 Washington: Gay Marriage is being legalized across the US.
The US Supreme Court has ruled that same-sex marriage is a legal right of citizens across the United States.
The 14 states in the country with bans on same-sex marriage cannot enforce the same on natives following the current Supreme Court rule.
Justice Anthony Kennedy wrote that the litigators were asked for equal dignity in the eyes of the law and now the Constitution has been decided to grant that right.
The ruling brings an end to the more than a decade of bitter legal battles.
Same-sex couples belong to the several affected states including Georgia, Michigan, Ohio and Texas are reported to have rushed to wed immediately after the court decision.
However officials in other states, including Mississippi and Louisiana, said that they had to wait until procedural issues were addressed.
President Barack Obama said that the ruling was a victory for America.
According to him, all of them could be more free, when all Americans were treated as equal legally.
However, Christian conservatives have condemned the Supreme Court decision.
Former Arkansas governor and presidential candidate Mike Huckabee referred the new order as an out-of-control act of unconstitutional, judicial tyranny.
Kellie Fiedorek, a lawyer for anti-gay marriage advocacy group, said that the decision was the sign of ignorance of the voices of thousands of Americans.

Video on the US Supreme Court decision regarding Gay marriage