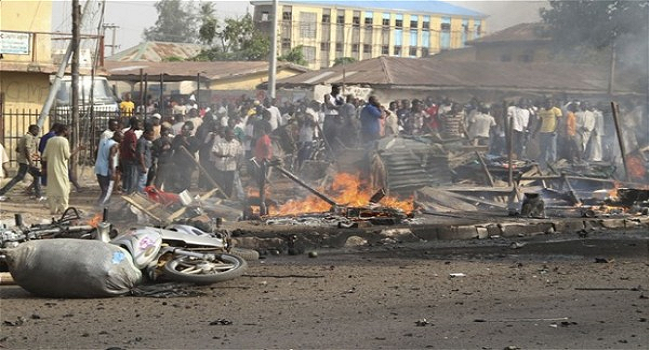 Damaturu: About 16 people are reported to have killed in Eastern Nigeria during a suicide bomb attack carried out by a 10 year old girl.
About 50 people are assumed to have wounded following the incident. The unfortunate incident was near a crowded market in the city of Damaturu in Yobe state.
Till this time, no group has shouldered responsibility of the attack.
However, Islamists Boko Haram had been blamed for similar suicide bombings in recent months.
Earlier in July nine people in the city were killed by two female suicide bombers.
Yobe police spokesman Toyin Gbadegesin said that the recent attack was the most latest one that has happened in the country.
He said that the girl child herself was blown up her explosives after entering into a crowded place where people were waiting to be screened by security services to get an entry into the market.
In the previous attack that happened on July 17th, two female bombers were reported to have killed people waiting to dedicate prayers for the recently finished Muslim festival of Eid.
Among the two child bombers, one was also aged about 10 years.
The army said that the blasts were targeted at a venue where volunteers were waiting to screen worshipers.
Boko Haram has recently stepped up its campaign of violence again after being pushed back by Nigerian forces who were backed up by troops from several neighboring countries.

Video on the suicide bombing at the Nigerian city Damaturu