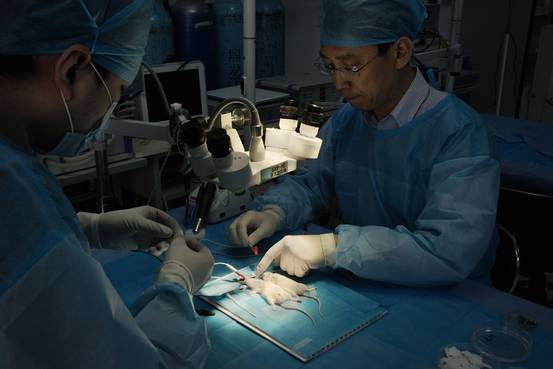 Beijing: A Chinese surgeon who has performed 1,000 head transplants on mice said that he was moving up the food chain and wanted to concentrate on monkeys next.
Dr. Xiaoping Ren who started working on mice in 2013, considers himself as the world’s leading authority of such type of surgery. The mice undergone transplant surgery by him were lived up to ten days after the operation.
Following the operations, some of the mice had to live with different colored heads than their bodies.
According to a report in the Wall Street Journal, Dr Ren is wanted to use monkeys for the next head transplant surgery. He is hoping to create the first head-transplanted primate that can live and breathe on its own, at least for a little while.
Dr Ren had been working at the University of Cincinnati, but returned to China to continue with his favorite work.
Researchers working in the area have been branded him as ‘Dr Frankensteins’ by disbelieving colleagues.
New York medical ethics Professor Arthur Caplan referred the whole idea as ridiculous.
However, a Russian computer scientist with a fatal wasting disease has said that he wanted to be the first human to undergo a head transplant.
Valery Spiridonov, 30, said that he wanted his head to be transplanted by Dr Sergio Canavero as early as next year and desired his head to be attached surgically to a healthy body. He is said to be a lifelong sufferer of a rare genetic disorder.
He said that his decision was final and no plan to change his mind. According to him he didn’t have really many choices in front of him as his condition was getting worse year after year.
Dr Canavero and Mr Spiridonov have already talked via Skype though they have not met personally yet. Moreover, the doctor has not reviewed his medical records too.

Video on mice Head transplant performed by a Chinese surgeon