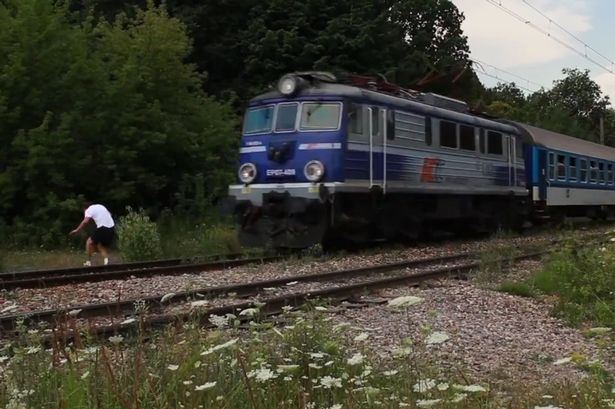 Poland: A daredevil in Poland has done a miraculous life threatening job by jumping in front of a fast moving train and escaping in an hairline difference.
To say frankly, this is absolutely not the way to handle safety around railway lines.
He was jumping across tracks seconds before a speeding train comes and escapes in a supernatural style by clearing the dangerous juncture with only seconds to go.
The video of the incident was done at a countryside in Poland where railway lines pass by.
For a first time viewer, the video viewing duration will definitely be breathtaking moments.
Anyway, that was really a life gambling game of the daredevil from Poland.
As per the footage, he takes a running jump and leaps over one set of tracks, and then crosses the next just as a train goes past.
At that instant, the train beeps, but the jumper remains unharmed after the dangerous stunt.
The footage exactly warns, what everybody shouldn’t be doing when it comes to their safety around train tracks.
A friend of the daredevil who posted the footage has also made a comment below the video saying that he knows what everybody going to say about, after viewing the video.
Then he consoles all viewers saying that they were performing that life gambling game with utmost care.
According to him, his colleague who made the adventurous jump was well planned and an expert in deciding when to jump in such occasions.
At last he requests the viewers not to try the game from their home.

Video on the miraculous jump by the Daredevil