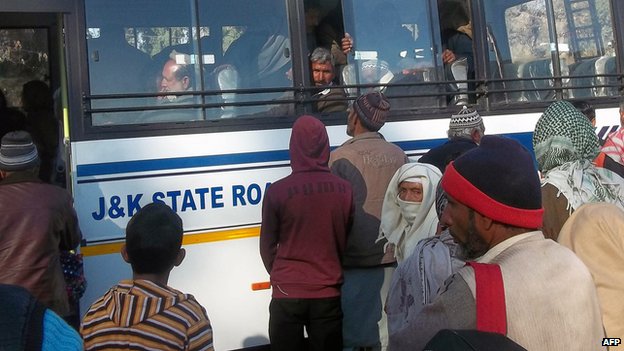 Srinagar: India and Pakistan have suspended bus services that run between divided Kashmir regions located in the two countries.
The surprising decision was following a dispute over alleged drug trafficking.
Trade across the Kashmir border was also prohibited over the weekend as India came to know that opium is being transported by Pakistani lorry drivers.
Officials have decided to convene a meeting to resolve the issue.
Trade between the two sides was resumed in 2008 after being closed for decades following tensions.
It was in 2005 that the bus services between Srinagar in India and Muzaffarabad in Pakistan resumed.
Cross-border trade and transport were the positive signs of improved relationship between India and Pakistan.
Both the countries had suspended their relationship several times over the years following high tension.
India and Pakistan have already fought three wars since their independence from Britain in 1947.
Two of the three wars were over the disputed Himalayan territory.
Even now, both have been claiming Kashmir as their integral part.
In recent months, the tension in the region had been increased and there were cross-border shelling in the region.