Lamb with angry old man face gets offer from circus 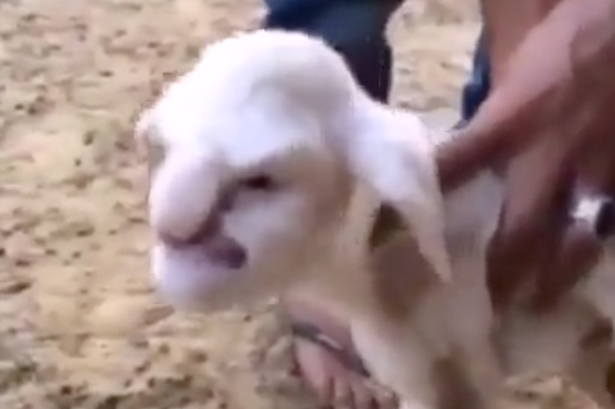 Dagestan(Russia): A lamb with a face resembling an angry old man is reported to have born in Chirka village close to the Republic of Dagestan in South-West Russia.
The angry old man faced lamb has been escaped from being chopped off following an offer made by the circus authorities.
Sheep farmer Blasius Lavrentiev, 45, had been waiting all the week for his prized sheep to give birth to little ones.
When he first came to know that the mother sheep was pregnant, he delighted a lot and started thinking about gaining money by selling the off-springs.
But he was totally disappointed when he viewed the newly born lamb having white hairy face resembling an angry old man.
But soon, the dismay of the sheep owner turned into delight again when the circus authorities offered an amount 10 times more than the normal price of the lamb.
The parents of the lamb are normal sheep having no deformities. Now the human-faced lamb has become the talk of the village.
According to the villagers the lamb’s appearance makes the children get frightened.
Villager Dana Mishina, 56, said that the new born little one was both freaky and sweet.
Local vet Dorofei Gavrilov, 49, said that the deformity of the lamb might be the outcome of excess vitamin A consumption by the mother sheep during pregnancy.
Some are interestingly foreseeing her appearance during old age.

Video on lamb with face resembling an angry old man