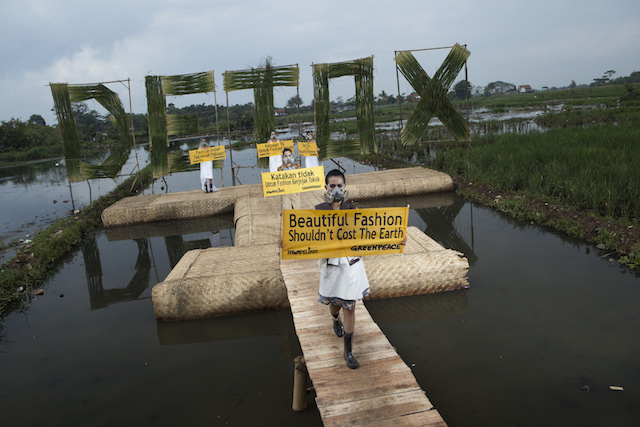 Rancaekek (Indonesia): Wearing gas masks and designer dresses, models paraded displaying a catwalk against a background of polluted, rubbish paddy fields in central Indonesia. The spectacular funny event was a comodels-wearing-gas-masks-highlight-environmental-pollution-in-indonesialorful condemnation on the role of the fashion industry in causing environmental deterioration.
The female models who marched up and down in black rubber boots on a runway of wooden planks in accordance with the tune of dance music displaying banners that read “Say no to fashion with a toxic trail”.
The show was organized by environmental group known as Greenpeace with an intention to target local designers for highlighting the destruction caused by textile factories.
Many among them are producing clothes for global brands and eject industrial waste into the country’s waterways causing environmental pollution.
The Greenpeace group’s campaigner Ahmad Ashov Birry, who was organizing the show said that the organization has urged the textile industry to stop polluting the environment with hazardous chemicals.
They have urged the government to take stern action against the polluters and strengthen regulations for the uncontrolled discharge of hazardous chemicals for a toxic-free future.
The recent condemnation show was at Rancaekek which located at the Citarum River Basin on Java island. The area is considered to be the heart of the Indonesian textile industry.
The region was declared as one of the 10 most polluted places on Earth in 2013 by environmental groups called the Blacksmith Institute and Green Cross Switzerland.
The groups were found a wide range of toxins comprising of Aluminium and manganese in the river, which supplies much of the water to the capital Jakarta.
The recent show was part of a Greenpeace campaign called “Detox”, which has been running since 2011. It was aimed at getting well-known brands to ensure that their suppliers do not release hazardous chemicals into the environment.
Big names such as Spain’s Zara and Germany’s Adidas have committed to the campaign.
Rivers and crops have been poisoned by pollution across the vast Indonesian archipelago by a wide range of industries, from manufacturing to mining.
According to Greenpeace, more than 1,200 hectares (3,000 acres) of paddy fields in Rancaekek were appeared to be highly polluted.
As per their analysis more than 100 million Indonesians, out of a population of 250 million, have no access to safe water.