‘Objection My God’ is a humorous movie of the year end 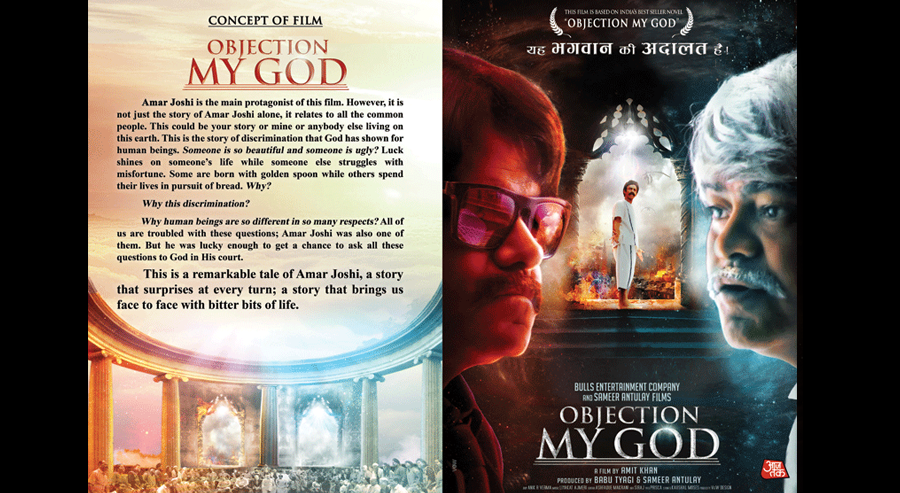 ‘Objection My God’ is a forthcoming Bollywood movie expected to release on December 14th 2014. The movie is produced under the banner called “Bulls Entertainment”. This comedy drama is jointly produced by Sameer Antulay and Babu Tyagi. In this movie the star cast is highly wonderful with Makrand Deshpande playing as Amar Joshi, Rajesh Khattar playing as Dayaram Dabra, Sanjay Mishra playing as Chitra Gupt and Zarina Wahab playing as Gayatri Joshi. It is expected that the movie would get attracted the viewers.
The movie story is very much interesting and has been written by Amit Khan. Music for the movie is being composed by Liyakat Ajmeri while Kailash Kher is shown his excellence as the singer. Ashfaque Makrani as an editor, is said to have done a brilliant job to discard the unwanted parts of the movie and make it concise. Now the content of the movie is powerful enough to make the viewers laugh warmly. The action sequences of the movie which are done jointly by Moses and Kaushal are absolutely humorous as well as interesting. V&W Design Studio is being authorized as the publicity designer of the movie.
This movie is expected to be a turning point in the film life of the veteran actress Zarina Wahab. This time, she has been trying to get a re-accomplishment in the Bollywood film industry by acting opposite to the lead actors of the time. According to the crew, the movie which has been in its final production stage, have adequate stuff to rejuvenate the moods and hearts of the spectators. The posters of the movie launched through various websites have revealed that they are enough to increase the curiosity of the movie goers. It is expected that the movie would help the audience to end the year by memorizing the humorous occasions of the movie.

Trailer video of the movie ‘Objection My God’