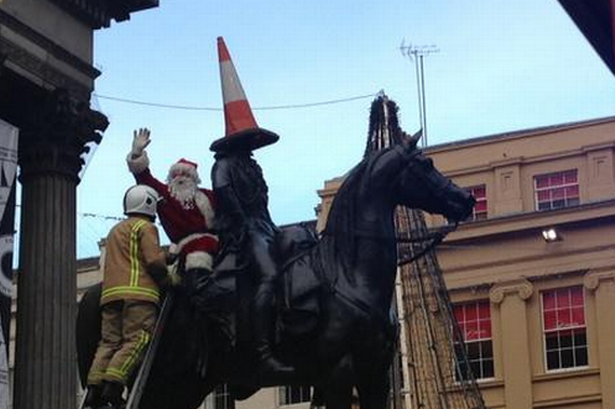 Glasgow: A man dressed as Father Christmas is reported to have arrested by police after climbing on the famous statue in Glasgow.
Crowds gathered as the 51-year-old practical joker climbed on the statue of the Duke Of Wellington situated in Glasgow city center.
He was seen sitting on the back of Wellington’s horse, waving to crowds, before firefighters arrived to get him down.
After fire crews brought him safely to the ground, he was quickly handed over to police officers waiting in a van.
The gathered crowd reportedly hissed and flouted at the police, shouting “Free Santa.”
He was obviously well prepared because he had a climbing support with him.
He was up there for quite a while until the fire service arrived.
The fire service put up a ladder and a fireman chatted with him and brought him down.
There were cheers when he was rescued but as soon as he was down the police put him in a van and everyone outcried.
A spokesperson for Strathclyde Police said that a 51-year-old man has been issued with a fixed penalty notice, following an incident at the Duke of Wellington statue in the Royal Exchange Square.
The police spokesperson has not identifies the jolly fellow and couldn’t confirm or deny whether he was, in fact, Father Christmas himself.
However, they did confirm that the man was not held in custody and was released after being charged a fine, so that he’ll be able to fly across the world delivering gifts to children as he wished to.

Video on the arrest of Santa Claus