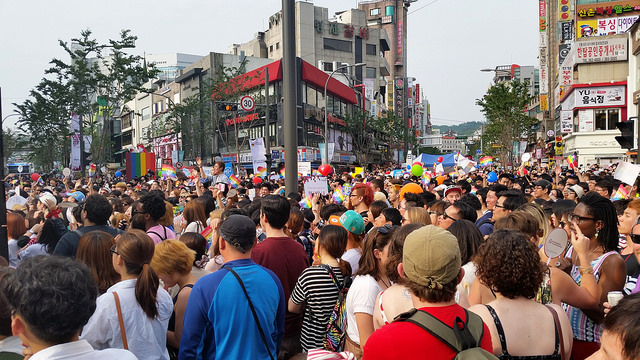 Seoul: Organizers of South Korea’s annual gay pride festival have decided to go ahead with scheduled parade in downtown Seoul, despite police ban as well as protests from conservative Christian groups.
More than 20,000 people are expected to take part in the street parade to be conducted on June 28. The date comes at the end of the Korea Queer Festival which has to be kicked off during next week.
As there are fiery and vocal resistance from conservative Christian groups, the police is being forced to ban the march, citing concerns over public safety and traffic disruption.
Gay and trans gender Koreans live largely under the shade of a country that remains deeply conservative about matters of sexual identity and where many still regard homosexuality as a foreign phenomenon.
Gay right activists said that some progress had been made in recent years, but the police ban on the parade was the first since the annual Queer Festival started about 15 years ago.
Woo Ji-Young, the executive director of the festival’s organizing committee, accused the police of generating pressure with respect to the viewpoint of the conservative Christians in the country.
According to Woo, the police should protect the rights of free expressions, rather than siding it with those trying to suppress it.
He said that the parade would go on as scheduled in spite of the police ban. He has also added that the activists would continue to pressurize the police to reverse the decision to ban the parade.
Violating laws on public rallies can draw a fine of up to two million won ($1,800) in South Korea. In certain occasions, they may have to face imprisonment up to two years. But Woo said that the organizers were planning to take the risk.
In recent years, the annual parade had been attracting a growing number of participants, even though there were an equal number of critics.
Last year, Christian activists were disrupted the march by lying down on the street roads while this time, they are tried in advance to block the event by filing competitive applications for the same dates and venues.