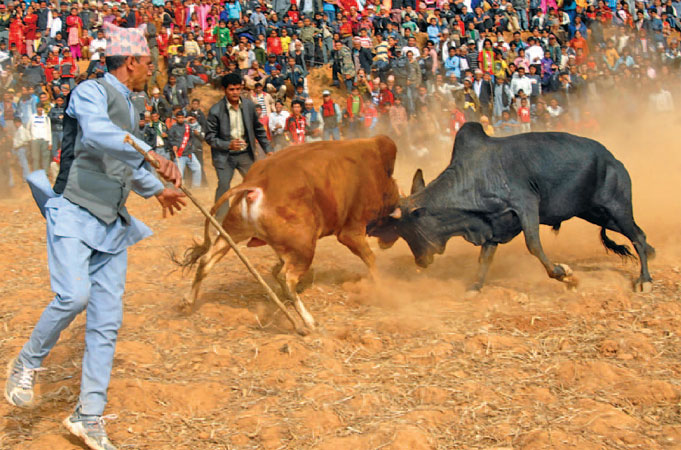 Kathmandu(Nepal): Thousands celebrated the traditional Bullfighting in Nepal with gaiety and enthusiasm.
Spectators of the Himalayan foothills nation were cheerfully encouraged the event and thus created a remembrance of the yesteryears Bullfighting in the country.
Unlike in Spain, the Nepalese Bullfighting requires no Bullfighter. Here two bulls (usually buffalo) fight each other in a contest.
Usually, this festival is commemorated at the end of the winter season in the region.
This year about 5000 spectators were arrived to view the spectacular fierce fighting.
Among them, there were people who used to view the fighting yearly.
According to them, this type of bull fighting is really enchanting.
In this years fighting, there were 16 pairs of bulls to provide eye catching entertainments to the viewers.
The prize money for the winner bull was Rs. 2000(20USD).
Every time when the bulls got ready for the fighting, the crowds on the surrounding hillsides were burst into applause.
They were roaring with delight as the animals made clouds of dust to fly into the air.
Unlike European bullfighting, bloodshed is absolutely very rare sight in this Nepalese traditional event.
Nevertheless, animal right activists had attacked the festival site, arguing that the event would cause injuries to the fighting animals and hence, demanded to ban the traditional bull encounter.