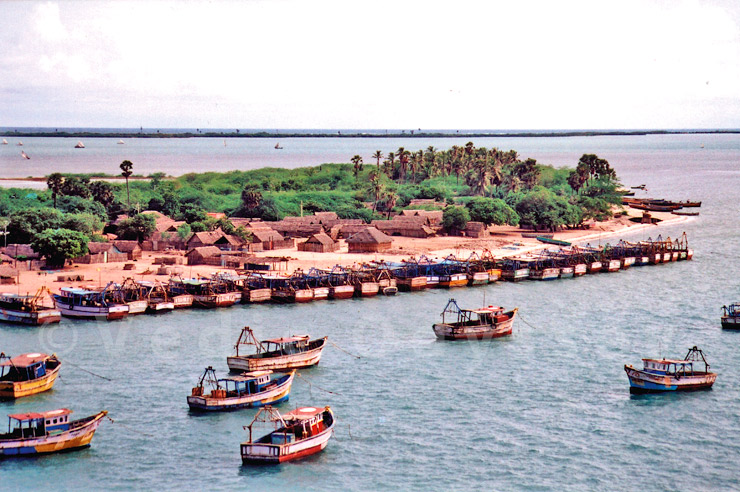 Rameswaram is a small scenic island located in the Gulf of Mannar. It belongs to the Tamil Nadu State in India. It is separated from the main land by Pamban Channel. The enchanting island is not only a popular tourist spot but also a major pilgrim center in South India. It is connected to the mainland by road as well as rail bridges which have got so many attractive features. Rameswaram railway station is the terminus point of Chennai-Madurai railway line.This sightseeing location is very much related to the Hindu epic Ramayana. This is assumed to be the holy place where Sri Rama, on his return from Sri Lanka, offered thanks to Lord Shiva. He is said to have performed sacraments on behalf of Lord Siva to wash away sins incurred on him by killing the Demon King, Ravana. As per mythological belief, Rama is said to have built a stone bridge across the sea between Rameswaram and Sri Lanka. This holy location is considered to be as important as Varanasi in north India.
Rameswaram is the nearest location in India to reach Sri Lanka. The Mannar Island in Sri Lanka is just 50 km away from Rameswaram. The row of rocks (Adams Bridge) seen between Rameswaram Island and Mannar Island support the geological evidence that the Adams Bridge might be the ancient land connection between India and Sri Lanka.
Rameswaram is known for its 22 ‘Theerthas’ or sacred wells situated around the main temple which is featured with rare and unique sculptural works. This place is equally sacred to worship both Lord Vishnu and Lord Shiva. According to Hindu Mythology it is believed that if one visits Rameswaram and prays to Lord Shiva, he would be relieved from his own sins.
Besides pilgrimage, Rameswaram Island has numerous sightseeing locations to be visited. The spectacular beaches in the island are Olaikuda, Dhanushkodi and Pamban. All of them are really enchanting with the presence of coral reefs. Hence, the beaches here are absolutely safe and comfortable to have an enjoyable sea bath. The beauty of sunrise and sunset that can be viewed from the beaches are really memorable. It is absolutely marvelous to view the horizon in Rameswaram where the blue sea water encircling the island touches the light blue sky at an infinite location in the sea.
Another popular entertainments of this area is scuba diving. With the support of diving glasses and respiratory tubes tourists can perform Scuba diving fearlessly. Certain birds known as Flamingos, Sea Gulls and a variety of cute birds are seen migrating to the Rameswaram Island during winter. Thus, in winter bird watching is a key entertainment here.
Rameswaram is one of the main fishing centers of Tamil Nadu. Large variety of fishes including export quality prawns, sea cucumber, and lobster are usually caught from here. The Island is also famous for the availability of dry fish. The house of former Indian President Dr. Abdul Kalam is at Rameswaram. Nowadays, this is an important tourist spot used to visit by the tourists.