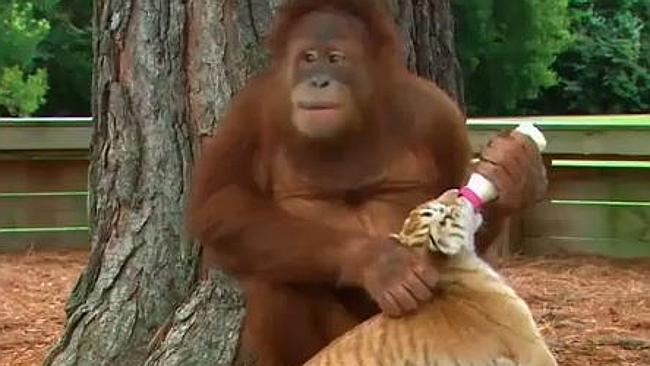 United Kingdom: In a zoo an orangutan was seen monkeying around with the cubs before sitting one on her knee and feeding it with a bottle of milk.
The marvelous scenes of baby tigers frolicking around in the zoo was cute enough.
Tigers are believed to be very cruel animals while the orangutan in the scene is a grey colored spectacular Chimpanzee.
But the moment when a beautiful orangutan started monkeying around with a trio of cubs was almost too adorable.
Th scene which showed the orangutan playing with the three small baby tigers, picking one up and letting him sit on her shoulder would touch everybody’s mind.
She then started kissing and cuddled one of the cubs before feeding him with a bottle of milk by sitting under a tree.
Actually the zoo was setting up a live stream to watch the cubs and their adopted mother all the time.

Video on Orangutan that feeds the trio tiger cubs